Unfortunately, fleas exist almost everywhere. It’s not surprising that you and your dog might run into fleas at dog parks or on the trail. But your dog can easily pick up a flea while taking a “break” in your backyard or walking alongside a neighborhood sidewalk.  They can also hop from the yard onto back porches, or hitchhike in on our clothing.

Fleas and their bites can irritate your pet and not just in the “annoying” sense of the word. Fleas can spread diseases to pets and affect the bond you share. After all, no one wants fleas inside their home. So just how big is the threat? Fleas on pets can lead to health concerns including these:

Many pets suffer from flea allergy dermatitis (FAD), an allergic condition caused by flea bites. In fact, it’s one of the most common reasons pet owners take their pets to the veterinarian.

When fleas bite, substances in their saliva can enter your pet’s skin and trigger an immune response. This can cause intense skin irritation and itchiness that extends well beyond the location of the bites, resulting in hair loss and skin infections that can make the problem even worse. Pets with FAD will continue to experience these miserable symptoms until the fleas are eliminated.  Besides flea control solutions, we can also give medication to control the itch.

While chewing at irritated skin from flea bites or even while licking a leg to remove dirt, pets can swallow fleas. If those ingested fleas happen to be infected with tapeworms, then the pet will become infected too. Once in the pet’s digestive system, the tapeworms will attach themselves to the intestinal lining using sharp, beak-like mouth parts. While tapeworms rarely cause noticeable signs of illness like vomiting, the thought of a tapeworm clinging to your pet’s insides is definitely unpleasant.

If your pet is infected with tapeworms, you may see pieces of the worms stuck around your pet’s anus. These pieces, which look like white grains of rice, are actually packets of tapeworm eggs. If you look closely, you might even see them moving. Once the outer casing of these packets 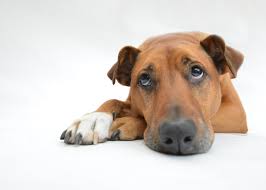 dries out, eggs will be released into the environment where flea larvae eat them and the cycle is repeated.

Thinking about just one flea being on your pet is terrible, let alone thinking about hundreds. But that’s just what happens if your pet ever has the unlucky experience of being infested with fleas. If a large number of fleas bite and take blood meals (yes, fleas drink your pet’s blood), your pet can develop anemia. This is a serious medical condition, especially in puppies and kittens, that must be promptly addressed through veterinary care. Symptoms include weakness, lethargy, pale gums, rapid breathing and, potentially, death if the fleas are not eliminated from the pet and the environment immediately. With severe infestations, a blood transfusion may be necessary.

Bartonella is the bacteria that causes Cat Scratch Fever in humans.  The bacteria can be transmitted by fleas to the cat, and when the cat scratches herself and gets flea dirt on her claws, she can transmit the bacteria to humans.

Most of the time the cat will show no symptoms, but there are exceptions, and several illnesses (e.g. fevers, eye inflammation, lymph node enlargement, heart disease) have been linked to bartonella infection in isolated instances.

While thought to be a concern only for cats, there’s increasing evidence that dogs too can be infected with bartonella. While the source of infection is not as clear cut as in the cat, infection with the bartonella bacteria in dogs may be linked to fleas or ticks. Veterinarians are finding more instances of the bacteria in dogs, and the resulting effects are being reported more often thanks to greater awareness and improved diagnostics. However, there are still a lot of unknowns (especially in dogs) about the related disease, called Bartonellosis. Affected dogs typically do not show any clinical signs. However, the bacteria has been linked to medical conditions associated with the heart, eyes and liver.