National Poison Prevention Week raises awareness of poison prevention nationwide during the third full week of March every year. The week is a time to highlight the dangers of poisonings for people of all ages and promote community involvement in 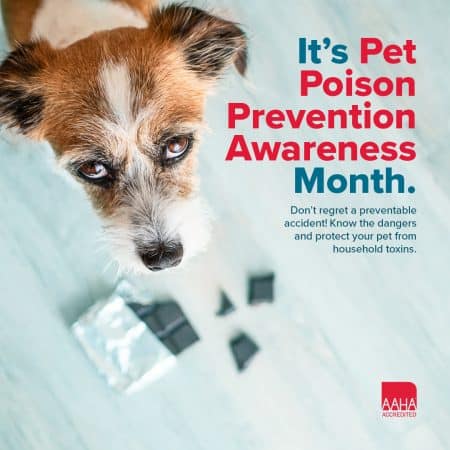 poisoning prevention.  We wanted to take this opportunity to raise awareness of common pet poisons and how to prevent your pet from being exposed.

Pet Poison Helpline provided a list of the top cat and dog toxins to watch out for. These toxins are listed by their commonality, so watch especially for those highest on the list. Keep this list handy to help keep your pet healthy year-round.

Below are the most common household items that are toxic to pets. Ensuring that your pet doesn’t ingest them will be well worth the time and effort needed to keep them a safe distance away.

Many sugarless gums, including some Trident™, Orbit™, and Ice Breaker™ brands, contain xylitol, a sweetener that is toxic to dogs. Candies, mints, flavored multi-vitamins, desserts and baked goods may also be made with xylitol. Even small amounts when ingested can result in a life-threatening drop in blood sugar, or with large amounts of ingestion, liver failure. Signs of xylitol poisoning include vomiting, weakness, difficulty walking, tremors and seizures.  Cats may be more resistant to it but we don’t recommend letting them consume it.

Common human drugs including NSAIDs (e.g. Advil®, Aleve® and Motrin®), acetaminophen (e.g. Tylenol®) and antidepressants (e.g. Effexor®, Cymbalta®, Prozac®) can cause serious harm to your pets when ingested. NSAIDs can cause serious stomach and intestinal ulcers as well as kidney failure. Acetaminophen can damage red blood cells in cats, limiting their ability to carry oxygen, and in dogs, at high doses it can lead to severe liver failure. Ingestion of antidepressants, which, of all human medications account for the highest number of calls to Pet Poison Helpline, can lead to neurological problems like sedation, incoordination, agitation, tremors and seizures.

With Easter and spring right around the corner, flowers will begin to bloom. As beautiful as they are, some flowers can cause severe toxicity, or even fatalities, in animals. Certain types of lilies including tiger, day, Asiatic, Easter and Japanese lilies, are highly toxic to cats. Severe kidney failure can result from the ingestion of even a few petals, leaves, or even pollen. In addition, ingestion of certain spring bulbs (e.g. daffodils, tulips) can cause severe vomiting, diarrhea, and abdominal pain. More serious reactions include abnormal heart rate or changes in breathing.

With the Easter bunny on his way, make sure your kids hide their candy from your dog. While the occasional chocolate chip in one cookie may not be an issue, certain types of chocolate can be very toxic. Baker’s chocolate and dark chocolate pose the biggest problem. The darker and more bitter the chocolate, the more dangerous it is to our pets. The chemical toxicity in chocolate is due to methylxanthines (a relative of caffeine) and results in vomiting, diarrhea, hyperactivity, abnormal heart rhythm, seizures, and possibly death.

Many fertilizers are basic gastrointestinal irritants. However, some are combined with dangerous chemicals and compounds called organophosphates or carbamates, which can be harmful or deadly to pets. Ingestion can result in drooling, watery eyes, urination, defecation, seizures, difficulty breathing, fever and even death.

Rodent, snail and slug baits are often used to keep pests at bay. However, if ingested, these poisons are extremely harmful to pets. They are highly toxic and without immediate veterinary attention can be fatal. Rodent baits typically can result in blood clotting disorders, brain swelling or kidney failure, while snail and slug baits can result in severe tremors or seizures.

Remember that what is safe for humans isn’t always safe for pets. If you think your pet has ingested something poisonous, it is always better (and less expensive) to get help immediately, rather than waiting until your pet is showing severe symptoms. Contact us immediately at 321-727-2421 or the Pet Poison Helpline at 800-213-6680 for life-saving help.